Patrick Makau has crowned the 38th BMW BERLIN MARATHON with a world record. The 26 year-old Kenyan clocked 2:03:38, beating Haile Gebrselassie and improving the record of the Ethiopian by 21 seconds. With a dramatic surge after 27 k defending champion Patrick Makau had dropped Haile Gebrselassie well behind. While the Ethiopian later dropped out after the 35 k mark he lost another world record to Patrick Makau on a miserable day for him: The Kenyan had passed the 30 k mark in 1:27:38, eleven seconds quicker than Haile in 2009. Split times will be officially ratified as world records if times were taken by official referees.

In the women's race Florence Kiplagat stole the show from the two stars, Paula Radcliffe (Great Britain) and Irina Mikitenko (Germany). The 24 year-old Kenyan clocked the second fastest time of the year worldwide, winning with 2:19:44. Irina Mikitenko finished second (2:22:18) and world record holder Paula Radcliffe was third (2:23:46) in her marathon comeback after giving birth. Regarding the depth of the women's elite results this was the best race in the history of the BMW BERLIN MARATHON. Atsede Habtamu (Ethiopia/2:24:25), Tatyana Petrova (Russia/2:25:01) and Anna Incerti (Italy/2:25:32) all were inside 2:26.

The emperor falters, the new emperor makes a breakthrough. However, Gebrselassie is not about to retire, and Radcliffe will rest, reassess and focus on 2012.

Berlin Marathon needs no introduction. It is one of the most famous marathon with the universally recognised fastest marathon course in the world. What's more, world record holders Haile Gebrselassie and Paula Radcliffe will be competing at this marathon.

This inaugural marathon is organized by Rotary Club of Bukit Larut with the support of Majlis Perbandaran Taiping. This is held in conjunction with the Taiping International Music Festival along with the celebration of International Day of Peace and also Taiping Town Council Month in September.

There is only a handful of marathon events in Malaysia, namely Standard Chartered KL Marathon, Penang Bridge International Marathon, Energizer Night Race, Putrajaya Night Marathon, Borneo International Marathon, Jelapang Padi Super Marathon and River Jungle Marathon. It is a welcome addition in the Heritage Town of Malaysia to promote healthy lifestyle by encouraging all to be active.

Taiping, the wettest town in Peninsular Malaysia, is a natural theme park surrounded by beautiful landscapes and environmental friendly conditions. It will be one of the most refreshing marathon venue that anyone could have dreamt.

It is not a race, and it is designed for runners who simply just like to RUN! Despite its name, there is no trails, no river crossings, no mud, no jungle... it is purely a road run.

The River Jungle Marathon is one of the most beautiful marathon destinations in Malaysia. The route will take runners through the scenic villages of Hulu Langat, leading up a 1000 feet climb or about 2.5KM of non-stop uphill running, past valleys, rivers, mountain views, jungle, a hot spring, and even monkeys. It is ideal for nature lovers who want to get away from the hustle and bustle of a city road race. The support for the event is excellent with 14 designated water stations and support vehicles along the route.

For the running experience at this event, read Jamie Pang's blog here. 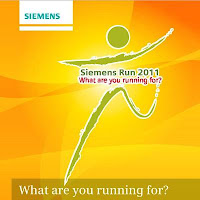 With its first inception in 2004, Siemens Run has been a popular run in Klang Valley. It was initially scheduled on the same weekend of Bersih 2.0 rally (10 July 2011), and as such it was postponed subsequently.

The route will take the participants through the greenery part of KL, notably Lake Garden, Tugu Negara, Jalan Sultan Salahhudin and Jalan Parliament. Incidentally, this is also a popular running route among runner community in KL.

In addition to the running events above, there is a string of sports events happening on the same weekend, namely:

The Reign Ends for Cancellara

Martin claimed his maiden world title in the discipline, with Britain’s Bradley Wiggins – a triple Olympic and six–time world champion on the track – winning the silver for his first worlds road medal.

Cancellara, the Olympic champion who had made the discipline his own in the past five years, came close to missing out on a medal in an error strewn performance before claiming the bronze.


Martin, a time trial specialist who rides with the HTC–Highroad team, had finished third in the event the past two years to Cancellara.

The only time the Swiss had failed to win the title since 2006 was in 2008, when he opted out of the world championships shortly after his Olympic gold medal success in Beijing, allowing Germany’s Bert Grabsch to triumph.

Martin, however, had signalled his form by relegating Cancellara to over a minute and a half on his way to victory in the recent 10th stage of the Tour of Spain.

And the German proved that he was fully deserving of the title after speeding his way, at an average of 51.8kmh, over the 46.4km course to post a winning time of 53:43.85 to beat Wiggins by over a minute.

“For me it is really important to find the right rythm from the start, and I felt early on I was going to go well,” said Martin.

“I had the perfect position and my speed was really fast. After I heard the first split times, I was confident and could feel it was my race.

“I’m getting stronger in my head and I’m getting better at handling the approach to the race.

Having set a time of 54:59.68, Wiggins had looked set for a third place finish until late errors by Cancellara left him in second place.

It was yet another great result for the Londoner, who made up for crashing out of the Tour de France in July with a broken collarbone by claiming a first ever Grand Tour podium with a third place finish at the Tour of Spain.


Twice Cancellara was forced to slow down to avoid hitting the barriers after tight turns.

On his second near miss, after negotiating a right–hand bend, Cancellara came to a standstill, losing precious seconds which almost cost him a medal.

“I started well but didn’t find the optimal rhythm and I started to feel that maybe today was not going to be my day,” said the Swiss.

“Mentally, maybe I cracked a bit and I couldn’t give any more towards the end.

“It was a bit of a rollercoaster for me, but Tony’s the deserved winner today.” – AFP

National track cyclist Mohd Azizulhasni Awang and several of his teammates will be cycling on Sept 24 for a charity event — Cycling for a Cure 2011.

YSD chief executive officer Yatela Zainal Abidin hoped that cycling enthusiasts around the country would come and join the national track cyclists on that day. Tabung Leukemia Yayasan Sime Darby was set up to benefit leukemia patients in Malaysia who are between the ages of 13 and 72 years and who are in dire need for bone marrow transplant.

“YSD is doing it differently this time around, by not only donating directly to the cause, but also encouraging the public to be part of the cause by donating through their participation in the cycling event,” she said.  Interested participants need to pay a participation fee of RM50 and can choose to race either in the 3.3km, 7.7km or the challenging 100.5km route that will go through various towns in Sepang, Nilai and Putrajaya.

“The 100.5km race is designed specifically for those who enjoy the grueling task of cycling such a distance,” said Malaysian National Cycling Federation deputy president Datuk Naim Mohamad.  “I was pleased when YSD approached me with this idea of combining cycling with a charitable cause and we have worked hard to make this happen. We hope that the public will come and join us in this event,” he added.

To register, participants can download the form from www.yayasansimedarby.com, complete it, pay the RM50 participation fee through cash deposit machine or transfer via online banking, and fax over the completed registration form with the relevant bank-in slip and online receipt to YSD’s office.

Reference: http://www.baikbike.com/cyclists-in-charity-ride-to-raise-money-for-leukemia-fund/
Posted by Poong at 9:03 AM No comments:

22 September is designated as World Carfree Day. (Note, it is "carfree", not "carefree")

World Carfree Day is an annual celebration of cities and public life, free from the noise, stress and pollution of cars. Each year on September 22, people around the world organize events of all sizes to showcase alternatives to the automobile. World Carfree Network invites organisations and individuals everywhere to join. Vector Designs is the only Malaysian member organisation.

World Carfree Day began as an open call for a grassroots celebration of cities without cars. The date, September 22, was chosen to coincide with the EU-sponsored European Mobility Week, but the hope is to involve people at all levels of society and from all over the world.

Unfortunately, to my knowledge, World Carfree Day is not celebrated in any cities within Malaysia. There is no activity being organised to promote World Carfree Day, except for the comics strip Kee's World in The Star publication (link) below.

Welcome to the blog of Team Independent Racers!

We are a group of independent racers based in Kuala Lumpur, Malaysia, who are passionate in cycling, running and triathlon. We are a amateur group to train ordinary human to become extraordinary athletes.

Team Independent Racers (Team IR) was formerly known as Brotherhood of Extraordinary Men (BOM). BOM was founded in 2008 by several enthusiastic runners. In 2009, BOM was renamed to the present Team IR to reflect our independent stand in sports politics and affiliations.

Today, Team IR has over 20 members locally and abroad, namely Singapore, Hong Kong and Australia. Though we are a small private cycling club, some of our members are hardcore runners, duathletes and triathletes. Generally, all team members are passionate in cycling and we always assist our team members in anyway to make their cycling experience more enjoyable. And hopefully we hope to improve their cycling performance too.

As Team IR continues ro grow in size, we endeavour to help our team members to grow too. In future, we will be launching our official team website, Facebook page and Twitter account, in addition to this blog and Cnectd group chat. We hope these would serve our members better in future communications with the latest news and group activities.