It is currently in the frenzy of amateur race season in Malaysia for runner and cyclist communities. Before 2011 ends, we have the following events:

At this juncture, a list of events have already been confirmed for 2012:

Recently, we have observed a phenomenon where many Malaysians opt for overseas races. Some of our Team IR members have already registered for some of these races. Unfortunately, it was announced recently that Ironman Korea Jeju has been cancelled.

It is certain that more events will be added progressively later. We will features selected races info in our Facebook official page (link) and Twitter (link) once the info is released.

Email ThisBlogThis!Share to TwitterShare to FacebookShare to Pinterest
Labels: races 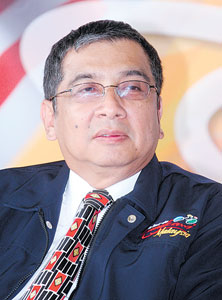 Sports is a passion he has nurtured for most of his 58 years.

He knows the adrenaline rush that comes from charging down a hilly terrain on his bike at a self-made circuit at his home in Peringgit, Malacca.

He knows the physical demands - the blood, sweat and tears - from playing rugby, football, hockey, badminton and tennis during his school days. And he knows all about the highs and lows of golf from being a caddie at the tender age of 14.

These experiences have contributed to Naim’s success as an administrator of sport - one who connects effortlessly with the athletes.

This distinct quality makes Naim one of the most popular chef-de-mission (CDM) to helm the nation’s SEA Games contingent.

Naim, who is deputy president of the Malaysia National Cycling Federation (MNCF), says he is enjoying his responsibility as the CDM of the Malaysian contingent to the 26th edition of the Games.

And he vows to lead the athletes to a successful outing in Indonesia.

“I have always been active in sports.

“I was known as an all-rounder during my school days as I played most sports,” recalled Naim.

“My passion for sport grew as I got older.

“At university, I was involved in organising sports events. It just took off from there and never stopped.

“I was chef-de-mission for the Commonwealth Youth Games in 2004. Now, some of those juniors have made it to the SEA Games. I am on familiar ground. The challenges may be quite different but I am not going to let them wear me down,” said Naim.

“It is time to alleviate the standard of the SEA Games. It certainly deserves more prominence as this is where stars are born. During a CDM meeting recently, I proposed that the SEA Games be one of the qualifying tournaments for the Olympics. It is time to raise the bar and the quality of this regional competition,” he said.

On the introduction of obscure sports like vovinam, bridge and paragliding, which tend to give the host nation some home advantage, Naim has mixed feelings.

“I do not totally oppose the idea. Afterall, the hosts spend a lot of money to set up the infrastructure for the Games. They naturally want to justify their efforts by having some events that they are good at. We can make some allowance for that.

“But it should be done in moderation as we do not want the SEA Games to turn into the SEA circus. We have made a good decision in skipping some of these disciplines. We are only taking part in 39 of the 43 sports.”

On his aspiration for the athletes, Naim was modest in his expectations. “The SEA Games provide the perfect platform for youngsters to strut their stuff.

“It is payback time for the athletes and they must justify all the support given to them. We are strong in some of the sports and we hope to excel in them - especially those under the Road to London programme,” he said.

“Hosts Indonesia will be our main rivals but we must not forget Thailand and Singapore. Whatever it takes, I hope our athletes will show good sporting spirit throughout the Games.”

In his own subtle way, Naim has laid down the law for the Malaysian contingent.