LeTua floored by lack of fund

FINANCIAL constraints have forced the country's most successful cycling team out of the UCI Asia Tour next year, the LeTua Team announced yesterday.

Shukor said the team will be taking a two-year break from racing on the international stage, while the management regroups and restrategises for the future.

"We were forced to take this decision as there was simply no funds available. We had been operating on a shoestring budget and the hike in administrative costs would have taken a big chunk out of the budget," said Shukor yesterday.

The team, operating mainly on contributions from club members and supporters, have represented the cycling community with distinction, serving as the only fully privately funded professional team in Malaysia the past five years.

"We could not leave the riders' future hanging in the balance, so we had to allow them to leave," said Shukor.

"We'd also informed the Malaysian National Cycling Federation (MNCF) and asked them to look into the development of our young riders like Adrian Chuah, Shawal Shafee and Hafiz Azeman."

LeTua, who began as Malaysia's first UCI Continental team in 2006, are still ranked as Malaysia's most successful team on the international stage.

They also hold the record as the only Malaysian team to have registered a stage victory in Le Tour de Langkawi (LTdL) via Samai Amari in 2008.

This year, LeTua became the first Malaysian team to lead LTdL when Libardo Nino took charge of the yellow jersey only to lose the overall victory by a slim margin to Venezuelan Androni Gioccatoli rider Yonathan Monsalve on the penultimate day.

The team's record third overall finishes in the 2007 and 2008 UCI Asia Tour team rankings have been unmatched by any Malaysian team thus far.

The team, who produced the likes of Anuar Manan, Ahmad Haidar Anuawar, Nor Rizuan Zainal and Hafiz Rozli, are remembered as the reason behind local fans' adoration for the revived Jelajah Malaysia.

Between 2006 and 2009, LeTua rose to fame with their brand of swashbuckling teamwork never seen before in a local team and their domination of flat stages in the Jelajah Malaysia with Anuar being led-out by Sayuti Zahit, Ahmad Haidar and Nor Rizuan.

The team even registered an overall victory via Tonton Susanto in the 2008 Jelajah Malaysia. 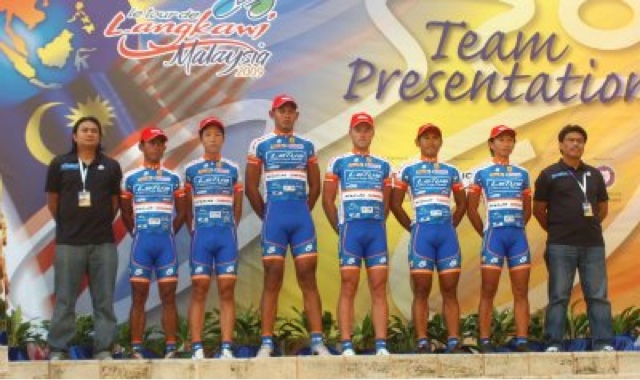