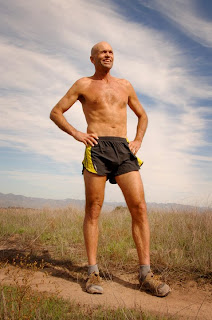 True, 58, was found to have idiopathic cardiomyopathy, heart disease with an unknown cause, the state's Office of the Medical Investigator found.

The coroner found numerous abrasions on True's extremities but no sign of internal injuries, though the left side of his heart was found to be enlarged. Chemical tests revealed the presence of caffeine and mild dehydration. The report said True's manner of death was "natural."

True, a legend among dedicated marathoners, was found dead on March 31 after leaving days earlier on a 12-mile run. His body was found on the banks of a small stream with just his legs covered by water, the report said.

The area where the marathoner was running was so extreme, search crews at the time had to have a fixed-wing airplane hover above searchers to communicate with the search and rescue office, said Steve Riley, the superintendent for Gila Cliff Dwellings National Monument.

Friends followed footprints and found True 2 miles off the trail, near a stream. Because of the challenging terrain his body had to be carried a mile by hand before being attached to a mule for the final mile to the trail head, Riley said.

Nicknamed "Caballo Blanco," or White Horse, True became a celebrity after he was featured in the best-selling book "Born to Run" by Christopher McDougall.

True served as race director for the Copper Canyon Ultra Marathon, a roughly 50-mile race that drew a dedicated group of runners to northern Mexico.